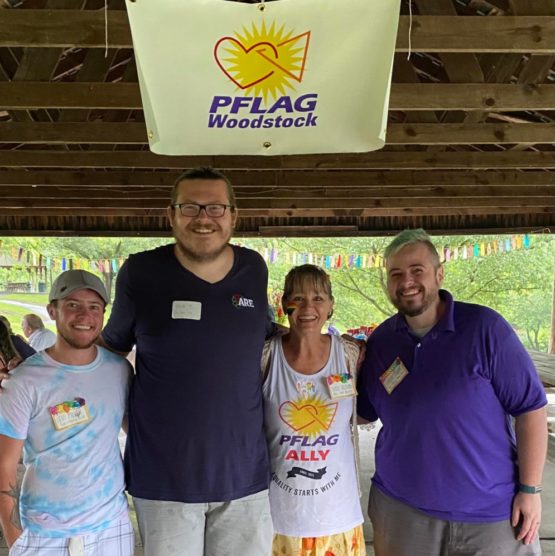 We are so excited for our chapter’s story to be featured on the front page of the Northern Virginia Daily!

I have learned a lot as a straight female 64-year-old with no gay children what it’s like to be part of this community.

We are a chapter where we can distill some of those myths. [There are] statements being made on the religious side of it that these people are doomed to hell; it’s an abomination. Because we are such a Christian community, that seems to be the bigger message that’s getting out. [But] these are human beings just like everyone else … just like any heterosexual.

We can’t be religious, we can’t be political; our tagline is that we advocate, we support and we educate,” Wilburn said. “We are a helping chapter.

Woodstock has a new chapter of PFLAG and is welcoming anyone interested in being an ally or learning about the LGBTQ community.

PFLAG is a nonprofit organization that advocates for, educates about and supports members of the LGBTQ community.

The local chapter started in May, said organizer Susie Wilburn.

“What happened is we were feeling like the [local] community was at an uprise against the LGBTQ community,” she said.

Hearing about challenges students were having in the public school system and community incidents that she didn’t feel area town council members were positively addressing, Wilburn said she was inspired to do something.

“Kids are bullied in school; they’re harassed,” she said.

It speaks to the level of unacceptance around the community, she said.

“I have learned a lot as a straight female 64-year-old with no gay children what it’s like to be part of this community,” Wilburn said.

“We are a chapter where we can distill some of those myths. [There are] statements being made on the religious side of it that these people are doomed to hell; it’s an abomination. Because we are such a Christian community, that seems to be the bigger message that’s getting out. [But] these are human beings just like everyone else … just like any heterosexual.”

In many cases, she said, being part of the LGBTQ community isn’t about sex or physical attraction.

“Within this community, many say that sex is not a deciding factor at all,” she said.

Wilburn decided to form the chapter after seeing a Facebook post by area resident Levi Miller, when he told his coming out story on a group page.

“I commented about challenges in our own county,” she recalled.

After they became Facebook friends and chatted some more through Messenger, she said she looked into starting a local chapter of PFLAG.

Wilburn is president of the chapter. Miller has joined as secretary, and the treasurer is Steve Shaffer.

“We need this in our community,” Wilburn said.

The national organization, which started in 1973 and used to stand for Parents, Families, and Friends of Lesbians and Gays, is not aiming to be controversial, she said.

“We can’t be religious, we can’t be political; our tagline is that we advocate, we support and we educate,” Wilburn said. “We are a helping chapter.”

Still, it’s tough to be the only chapter in the region with the next closest in D.C., she said.

“There used to be one in Winchester and that one disbanded several years ago,” Wilburn said. “I’ve had folks reach out to me from as far away as Fauquier County because they have seen similar problems there.”

The website, pflag.org, lists chapters in Charlottesville as well as the areas of Richmond, Blacksburg, Williamsburg, Norfolk and Morgantown, West Virginia.

PFLAG Woodstock has held four support meetings so far, and Wilburn said that her contacts in Fauquier are thinking of starting a chapter too.

The chapter welcomes anyone who wants to learn more, she said.

“I’ve had to learn a lot about why the pronouns are a thing, why the triggering is a thing, why mental health is a thing,” she said. “I’ve traveled that journey to learn what this is really about.”

Since holding a potluck event this summer in W.O. Riley Park in Woodstock that attracted about 55 attendees, the group has been passing out rack cards to libraries and other locations to spread the word.

They’re also holding a once-a-month support group for those who are LGBTQ and struggling with depression.

At their latest meeting, five of 12 attendees were from the transgender community, she said. But they have also welcomed parents and other family members who come to learn how to support a loved one who has come out as gay or trans or nonbinary.

“It was hard for them because they were going through a grieving process,” Wilburn said. She recalled one woman telling her, “I thought I had a daughter and now I have a son.”

Additionally, every time there’s an incident reported on the news of a hate crime or reports of bullying, Wilburn hears from interested residents.

“They’re concerned for their child’s safety,” she said, “… or the school policies.”

Besides offering support, she said the chapter also wants to educate about the LGBTQ community and dispel fear and myths.

“They have the same wants and needs as anybody else,” she said. “It’s not something to fear or to judge.”

For more information about the chapter, email pflagwoodstockva@gmail.com.

Yesterday we held our first official community event as an official PFLAG chapter. The storms and rain that rolled through the area yesterday afternoon did present an extra challenge with the wetness and some wind, but even with the weather, the Potluck surpassed our expectations! We were a little later getting started due to the rain, but we had a great turnout with lots of fantastic food, great company, and wonderful conversation! The one great thing about the rain was that it kept the temperature comfortable for everyone!

Our potluck was something quick we got together as a way to introduce ourselves to the community as well as celebrate Pride Month. We didn’t have a lot of time to prepare something elaborate due to just obtaining our affiliation in May. But even so, our chapter president Susie, went above and beyond in ensuring that everything went smoothly and shouldering a huge bulk of the time/labor investment that even a small event as this one required. A huge shoutout to our Board Member Laura and her husband Richard for supplying and cooking the meats for our event!

Our event was attended by Shaun Connors, who is our representative/contact person from PFLAG National. He drove all the way down from Washington DC to attend our event and we couldn’t have been happier to have him! He provided us some great information and has been truly instrumental in us getting where we are right now as a chapter. And even more importantly, he is going to help us get where we want to be so that we can best serve our community.

We did have some questions around what we can do for the LGBTQ+ youth and we haven’t quite gotten to that point yet. There are a lot of logistical and legal hurdles to account for when it comes to having something set up for youth. But we heard you and we know that there is a want and a need for something local for the youth and it is on our radar. It is something we will work with Shaun closely on and see what we can do.

We are so grateful for each and every single person who came out and joined us yesterday. We can’t do what we do without you and we want you to know that we are here for you!

Enjoy a few of the pictures snagged at the potluck yesterday- there are not many because we spent more time socializing and getting acquainted with you. 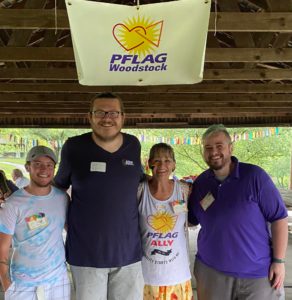 We had Matt with AIDS Response Effort (ARE) set up with us at our potluck! We are grateful he was able to join us and spread awareness to his organization! 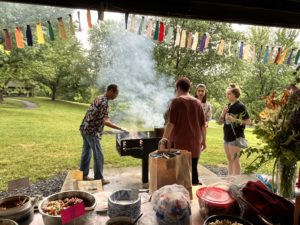 Laura & Richard hard at work grilling the hotdogs and hamburgers for us! 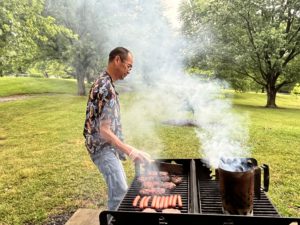 Richard our grill master working in between the waves of rain! 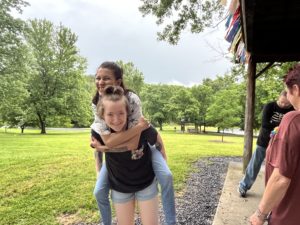 It was an even where you could be yourself! 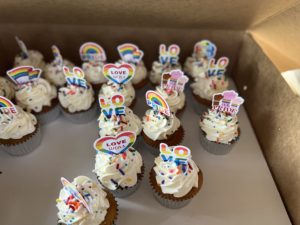 Some beautiful Pride cupcakes made for us by our very own Flour & Water Co, located right here in Woodstock! 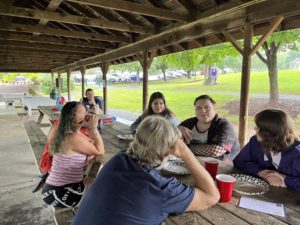 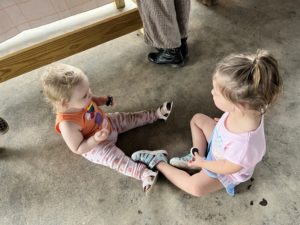 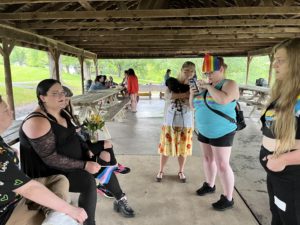 Great conversations being had! 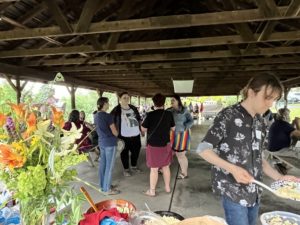 Coming together as a community and meeting new people. 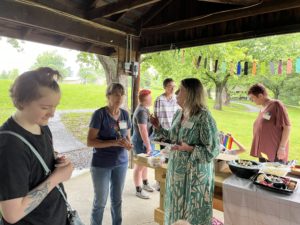 Gathering around food- where so much great conversation takes place! 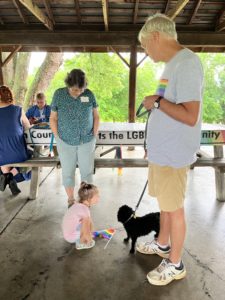 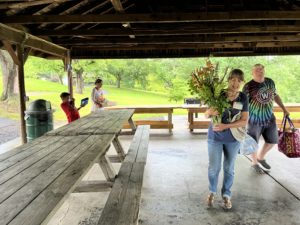 Our clean up crew.

Just in time for Pride Month, we are ready to introduce ourselves to the community at long last! After recently obtaining our affiliation in May, it did not leave us much planning time for Pride Month events- but we still wanted to make sure we squeezed something in so people can know we are here!

All are welcome- LGBTQ+, friends, family, allies, etc! We are here to provide resources and support to the LGBTQ+ members of our community as well as their families, but we want everyone else to know that we’re just your average community members. We are your neighbors, your friends, your coworkers.

We will be providing drinks and some snacks, but please bring along a covered dish or something to snack on! We will be set up to sign up new members or accept donations.

We hope to see you there! 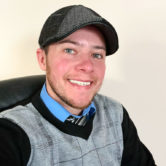